a. After a bit of thinking, the first thing we notice about this problem is that the bridges are the only things that matter: the shape and size of the islands are irrelevant. So we can simplify each terrestrial region down to a single point – let’s call the points A, B, C, and D – and let each bridge correspond to a line between two points: 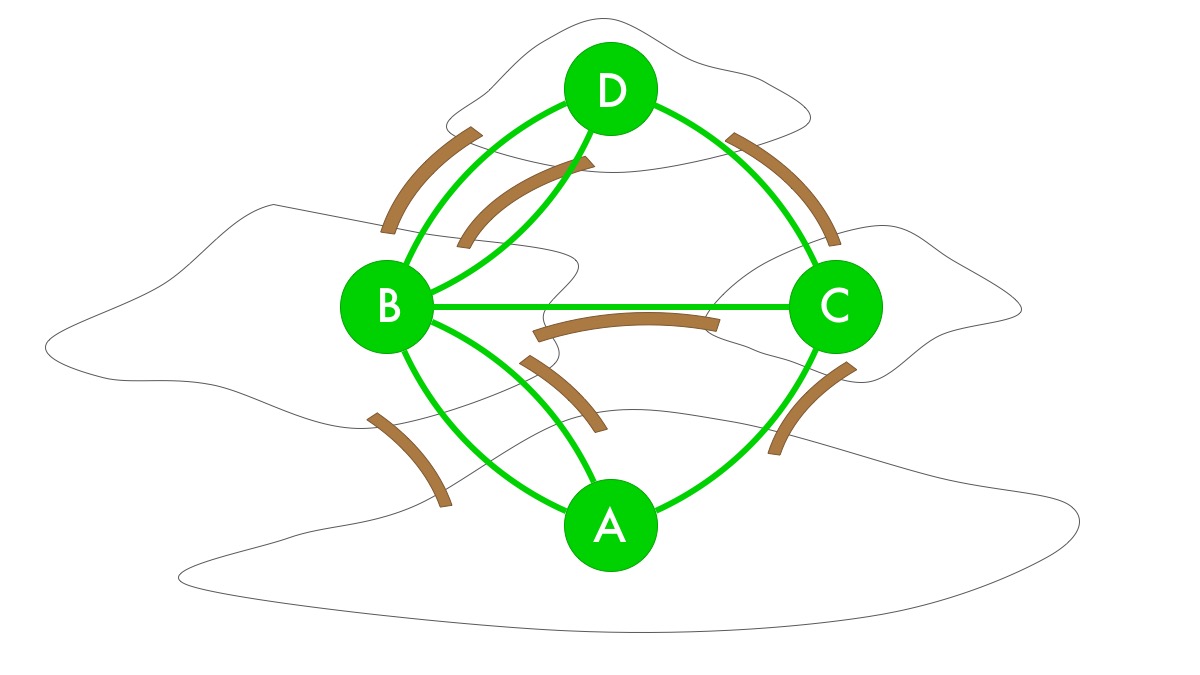 In fact, we can now get rid of the map entirely and just work with the points and lines: 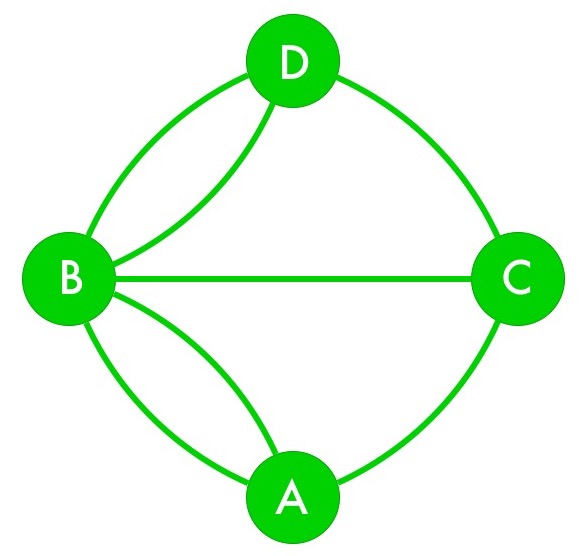 What we just made is called a graph: it has a set of nodes and a set of edges connecting the nodes. Any tour route will start at one of the nodes and trace a set of connected edges before ending at a (possibly different) node.

After playing around with this graph for a while, we might notice the following: whenever we pass through a node in the middle of a tour route, we take one bridge into the node and another bridge away from it. This tells us something very useful: except possibly for the start and end nodes, every node will have an even number of traveled-over edges connecting to it. For instance: 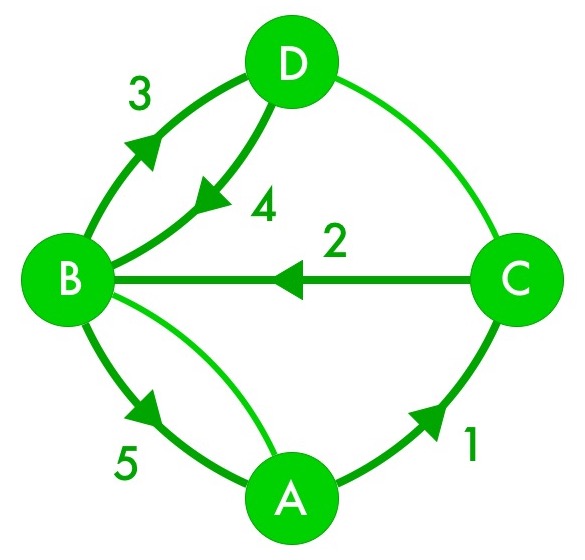 Looking back at our bridge graph, we now see that all four nodes have an odd number of bridges connecting to them. So in the current bridge arrangement, it is impossible for Morton to find a tour route that crosses every bridge exactly once.

b. With the northwesternmost bridge gone, the bridge graph now looks like this: 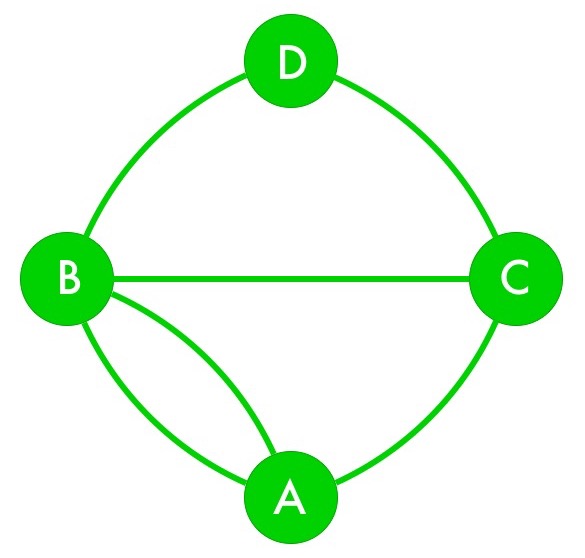 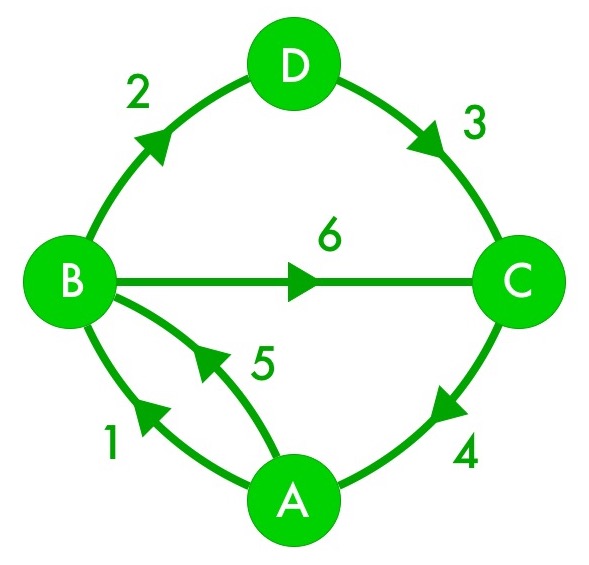 (You may have found a different solution than this one. That’s great! How many more solutions can you identify?)

Since both nodes A and C have to be endpoints, Morton can build a tour route that crosses each bridge exactly once, but not one that starts and ends at the same node.

c. To make it possible to complete the bridge tour with the same starting and ending node, all nodes must have an even number of bridges connecting to them. The only way we can do that is to connect nodes A and C with another bridge: 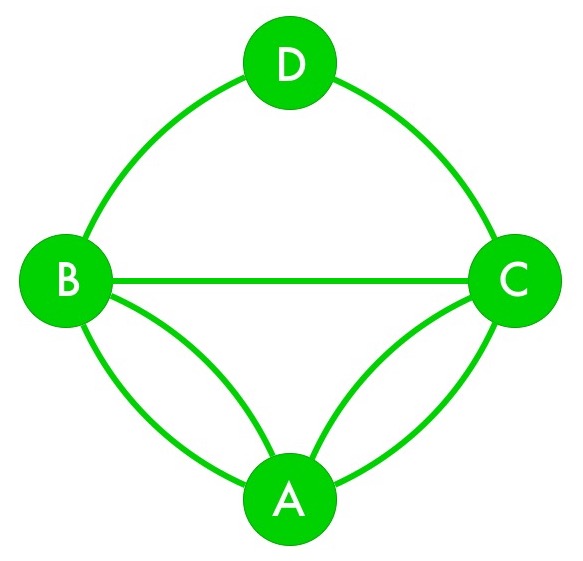 And indeed, a bit of experimenting turns up a complete bridge tour with the same starting and ending node A: 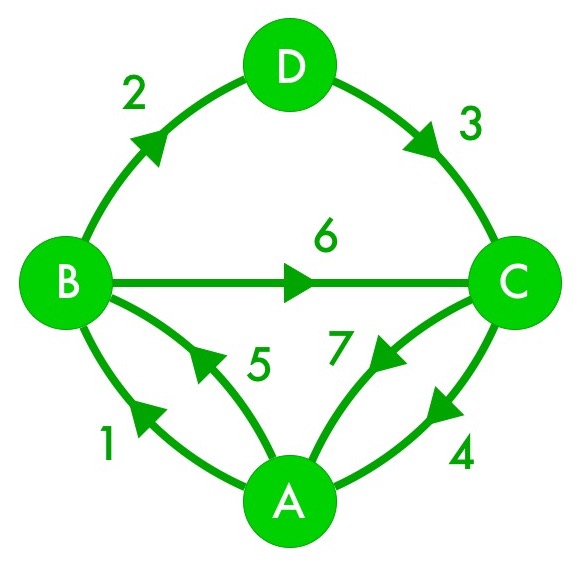 This, then, is what Morton should propose at the town hall meeting.