The Sierpinski Triangle is a fractal named after a Polish mathematician named Wacław Sierpinski, who is best known for his work in an area of math called set theory. Here’s how it works. We start with an equilateral triangle, which is one where all three sides are the same length: 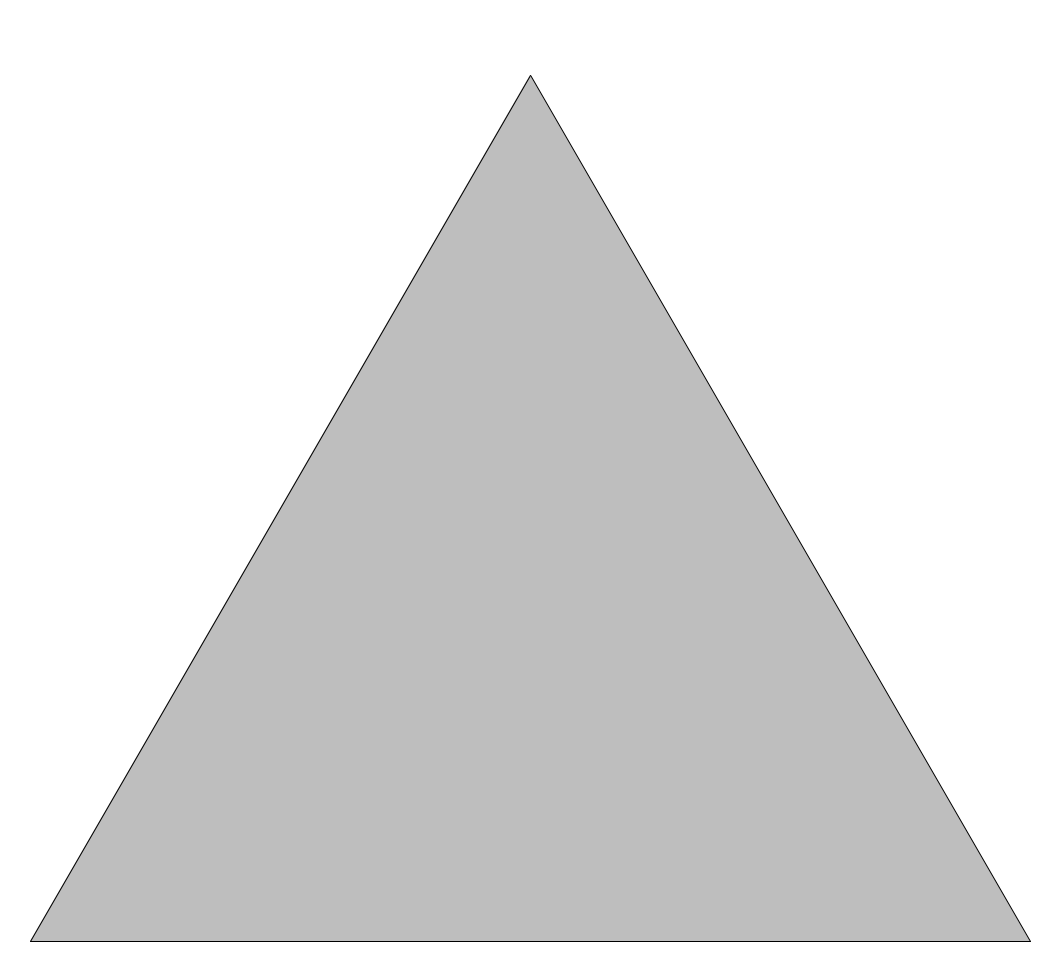 Now we repeat the following rule on this triangle indefinitely:

Now let’s try it for our beginning triangle. First, we apply The Rule once: 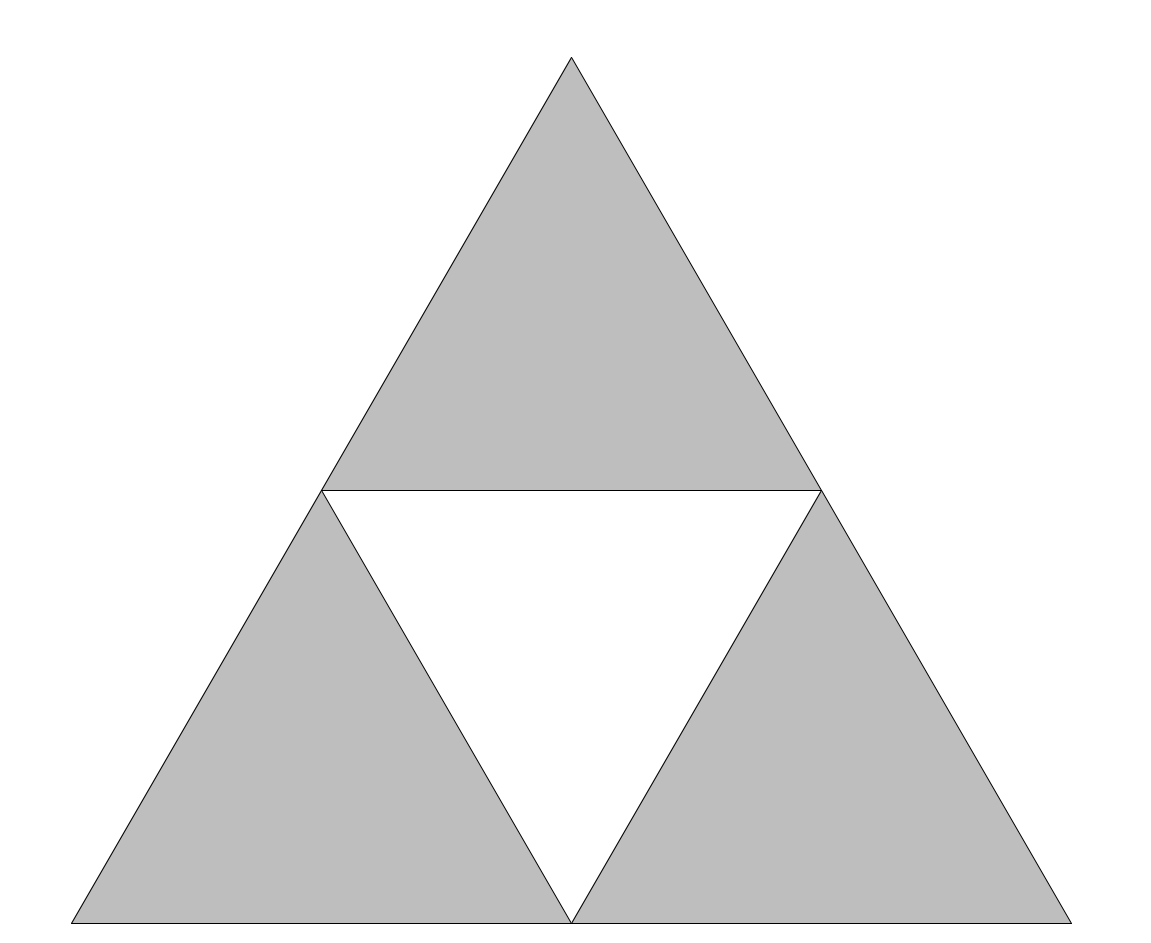 Now for each of those little gray triangles we have left, we’ll apply The Rule again: 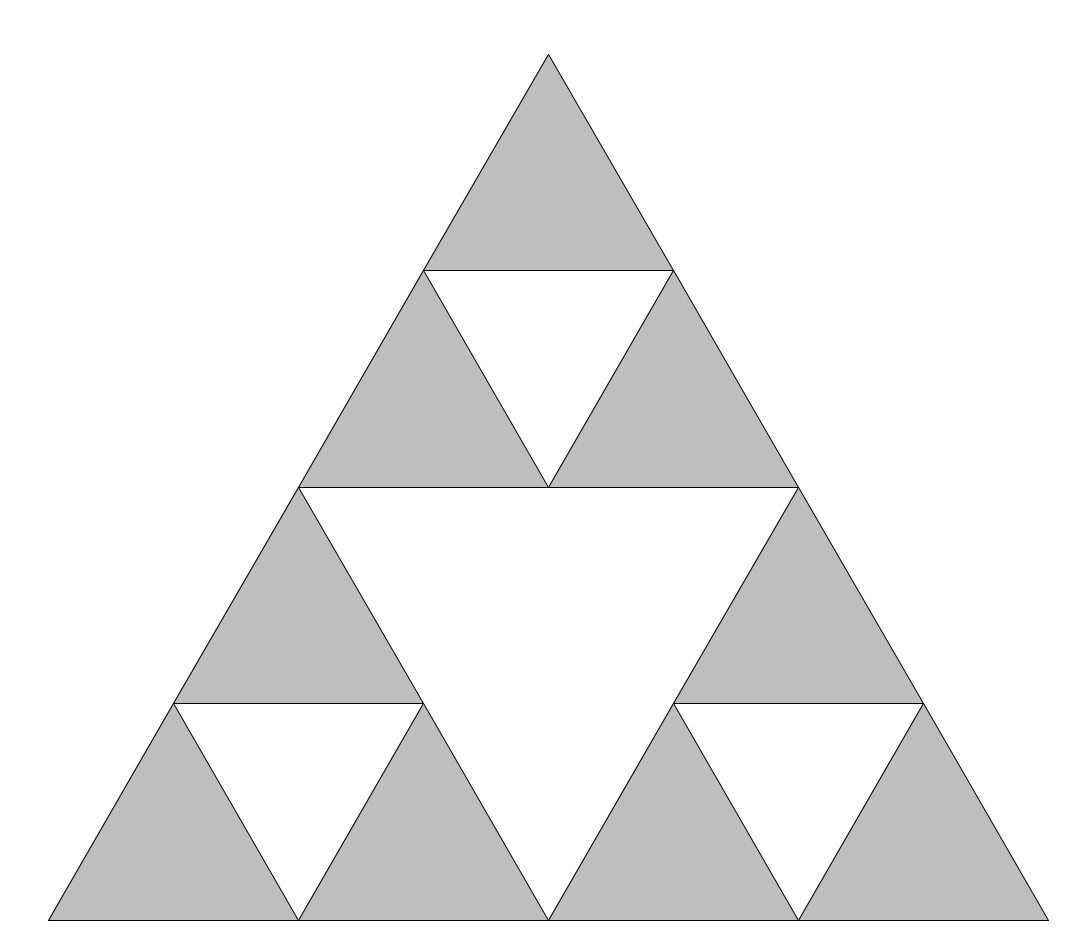 And we’re left with more little gray triangles, so we can apply The Rule again: 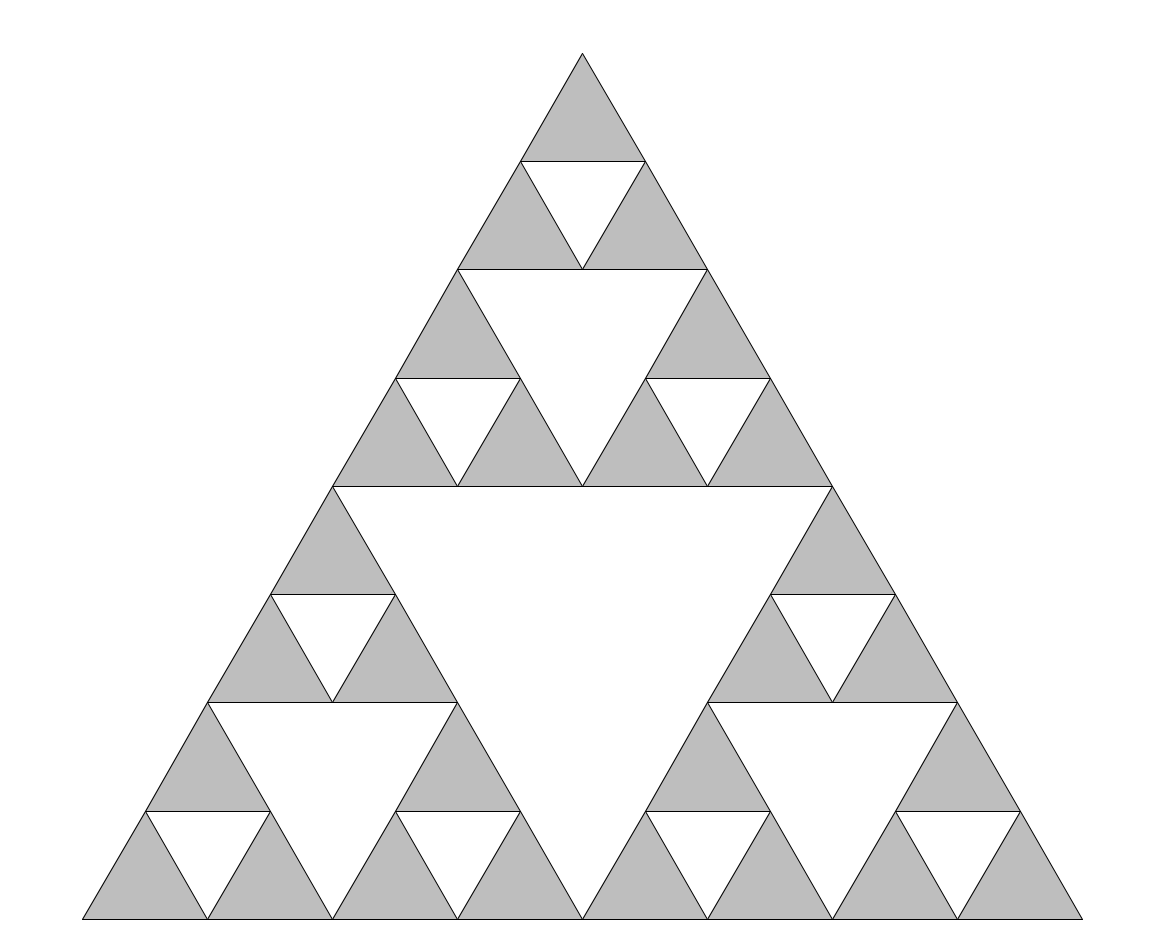 And we’ll always keep getting smaller and smaller gray triangles, so we can keep doing this for as long as we want, even off to infinity: 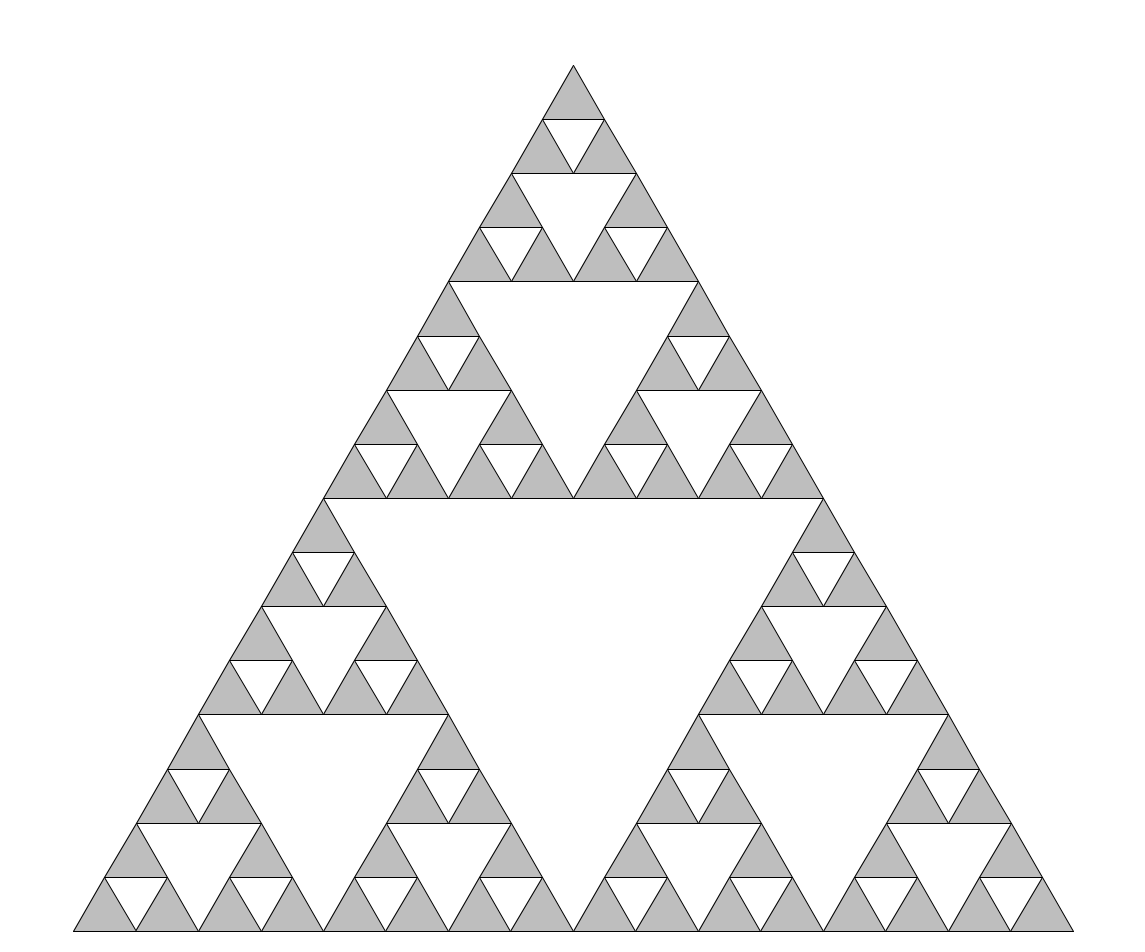 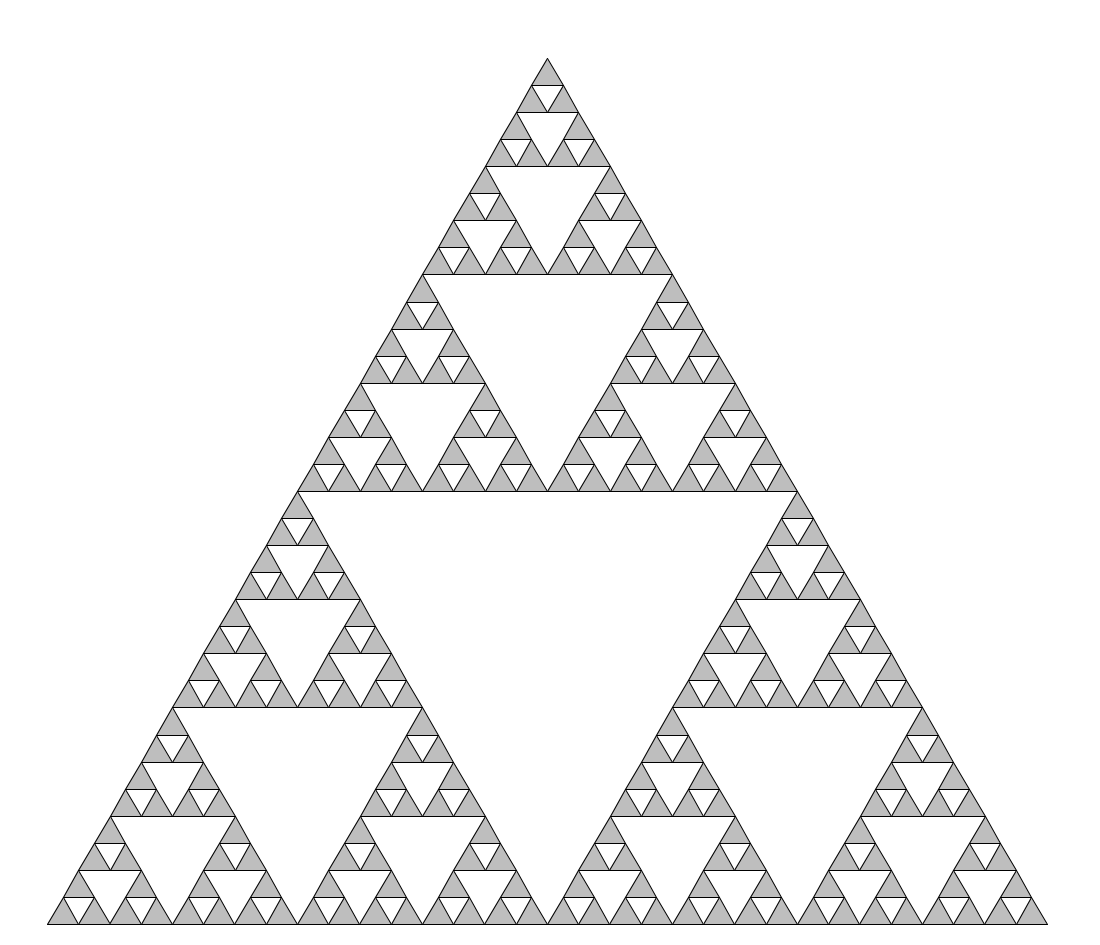 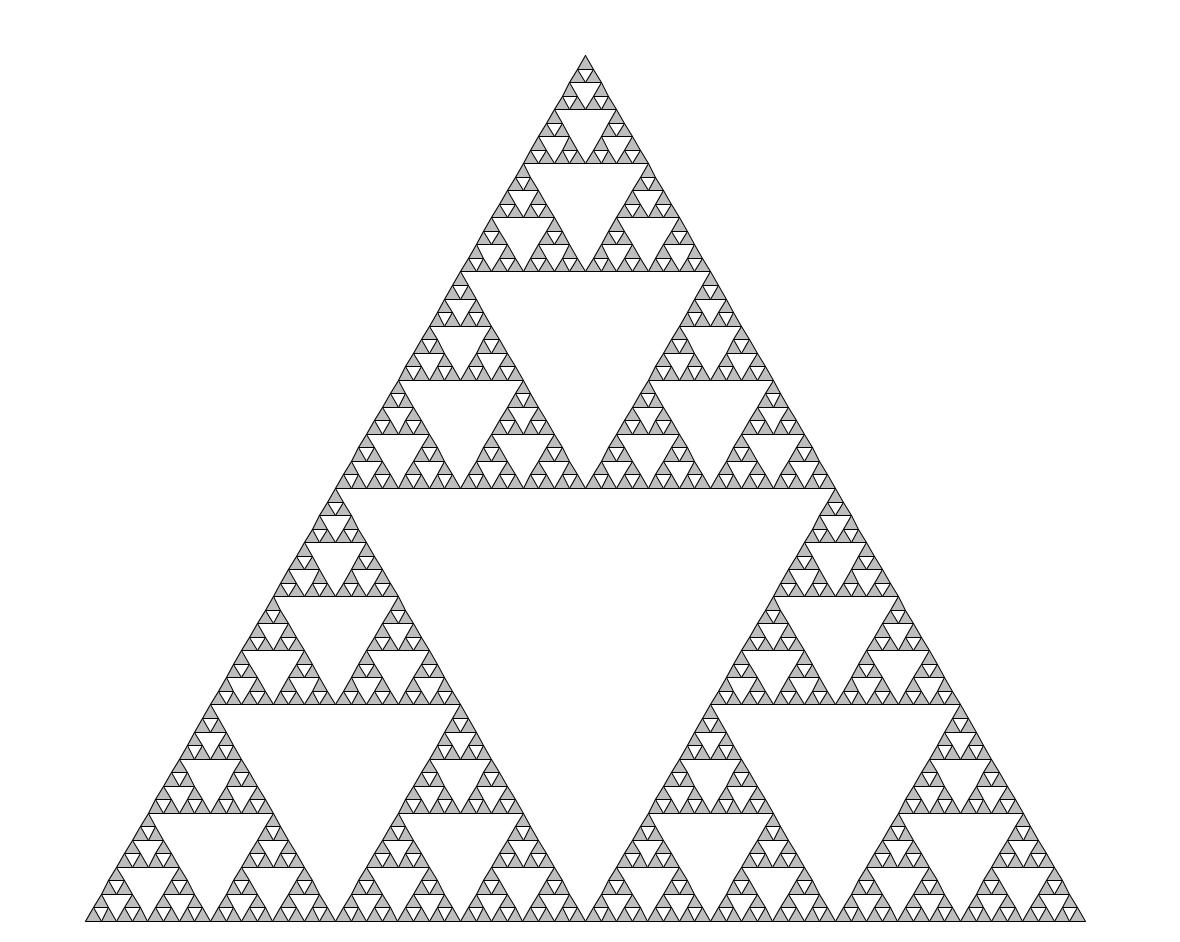 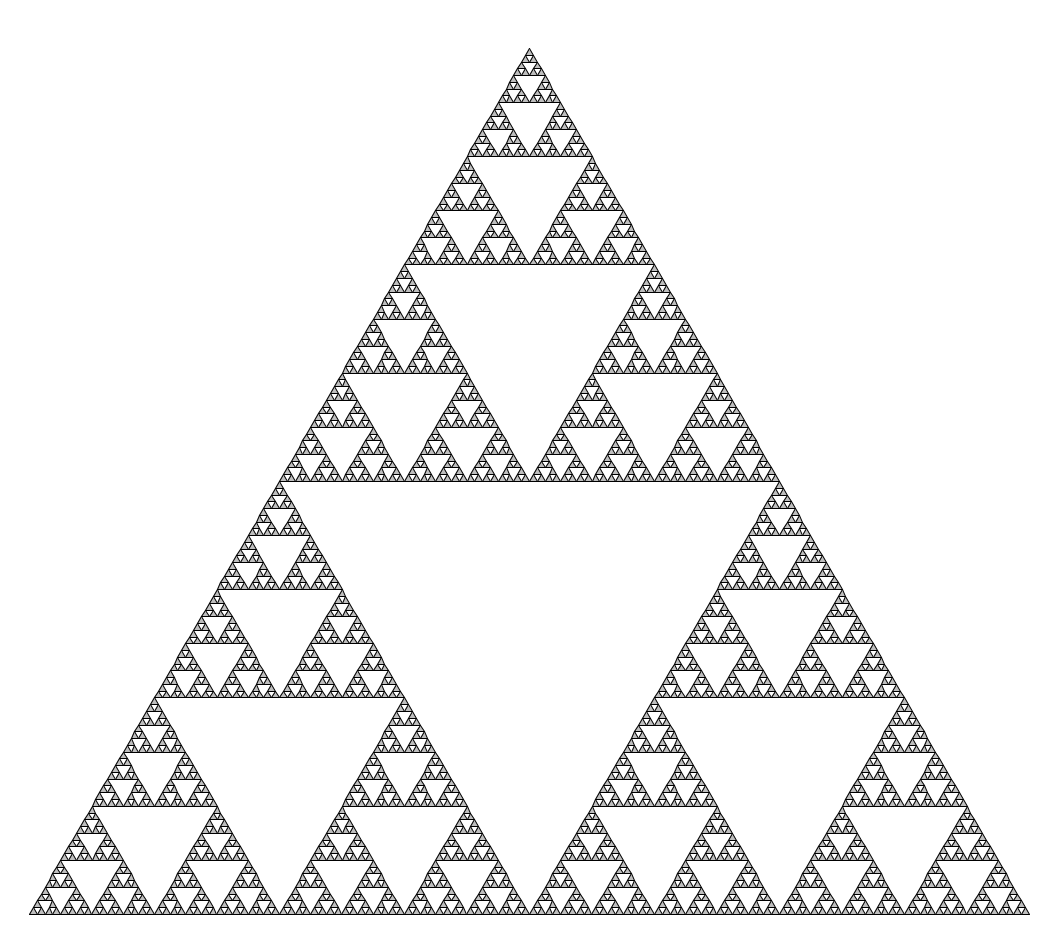 There we have it. That’s the Sierpinski Triangle.

To get to know the Sierpinski Triangle better, here’s some food for thought:

Now, Sierpinski didn’t stop at the triangle. He extended this concept of chopping up and taking away, and he applied it to a square. Here’s the Rule: Whenever you see a square, break it into nine smaller squares and remove the middle one.

You’re left with eight smaller squares, so you can apply the Rule again to each one. 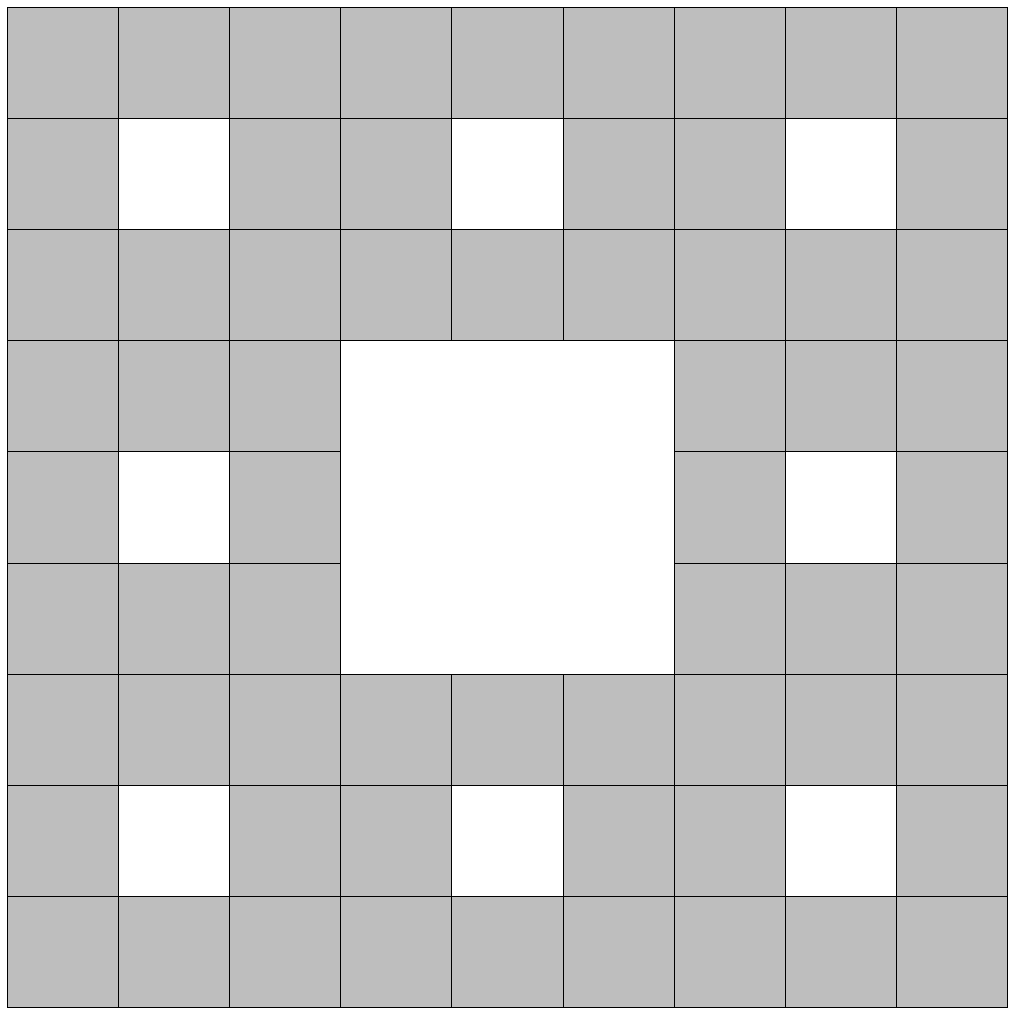 And, again, we can keep doing this as long as we want. 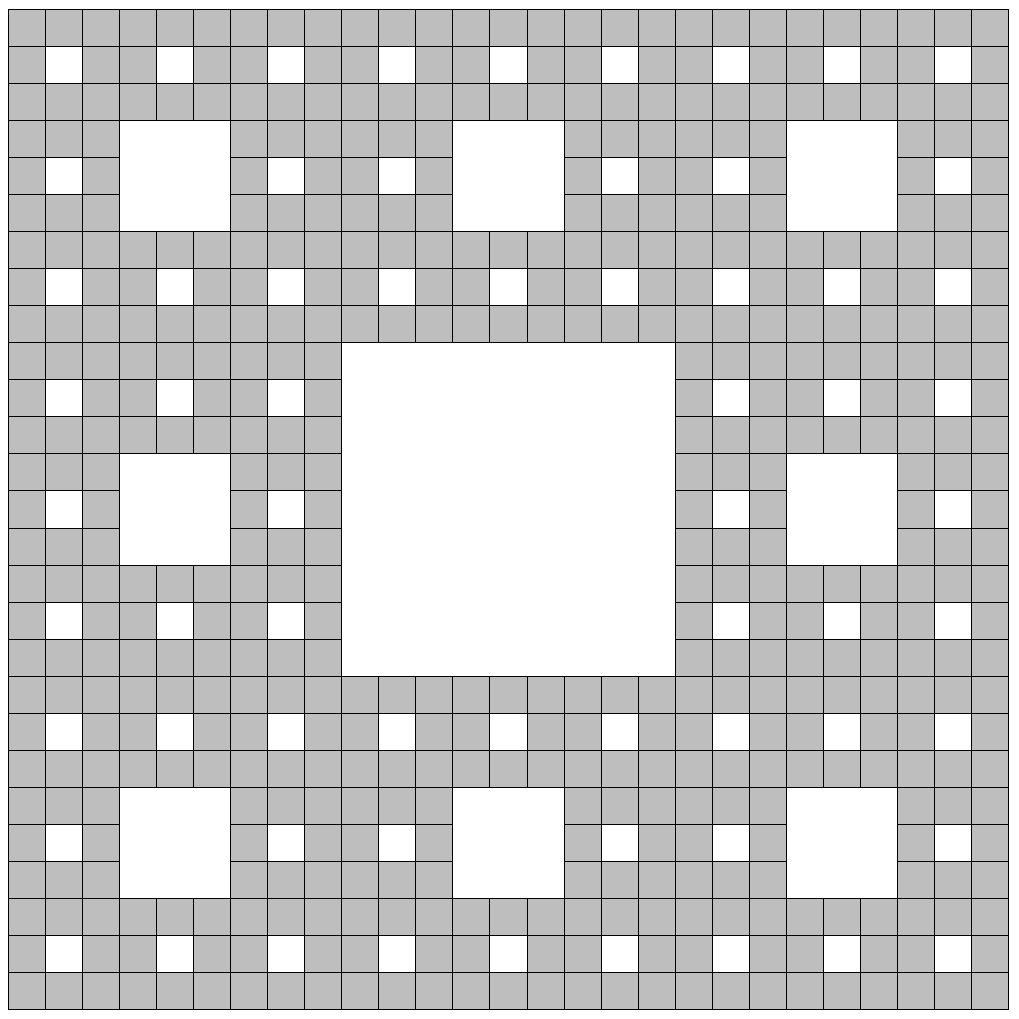 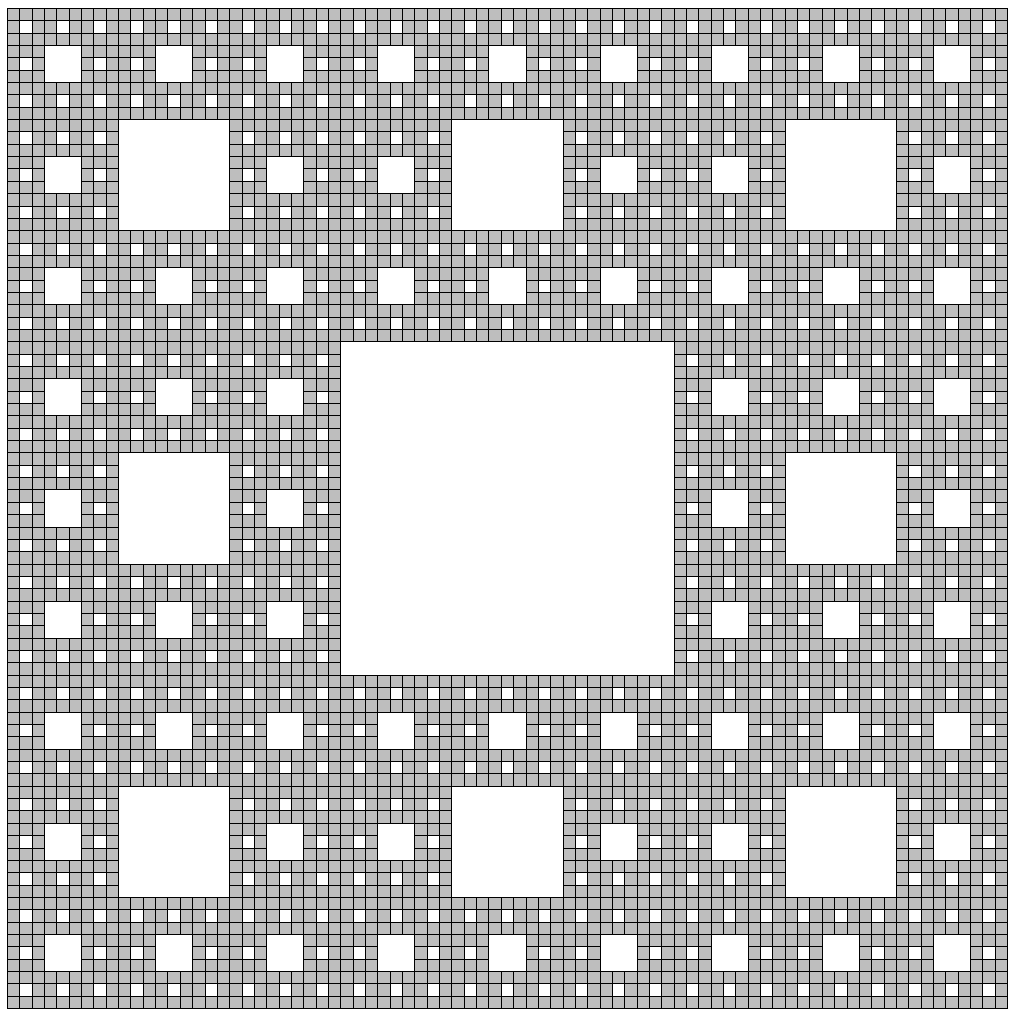 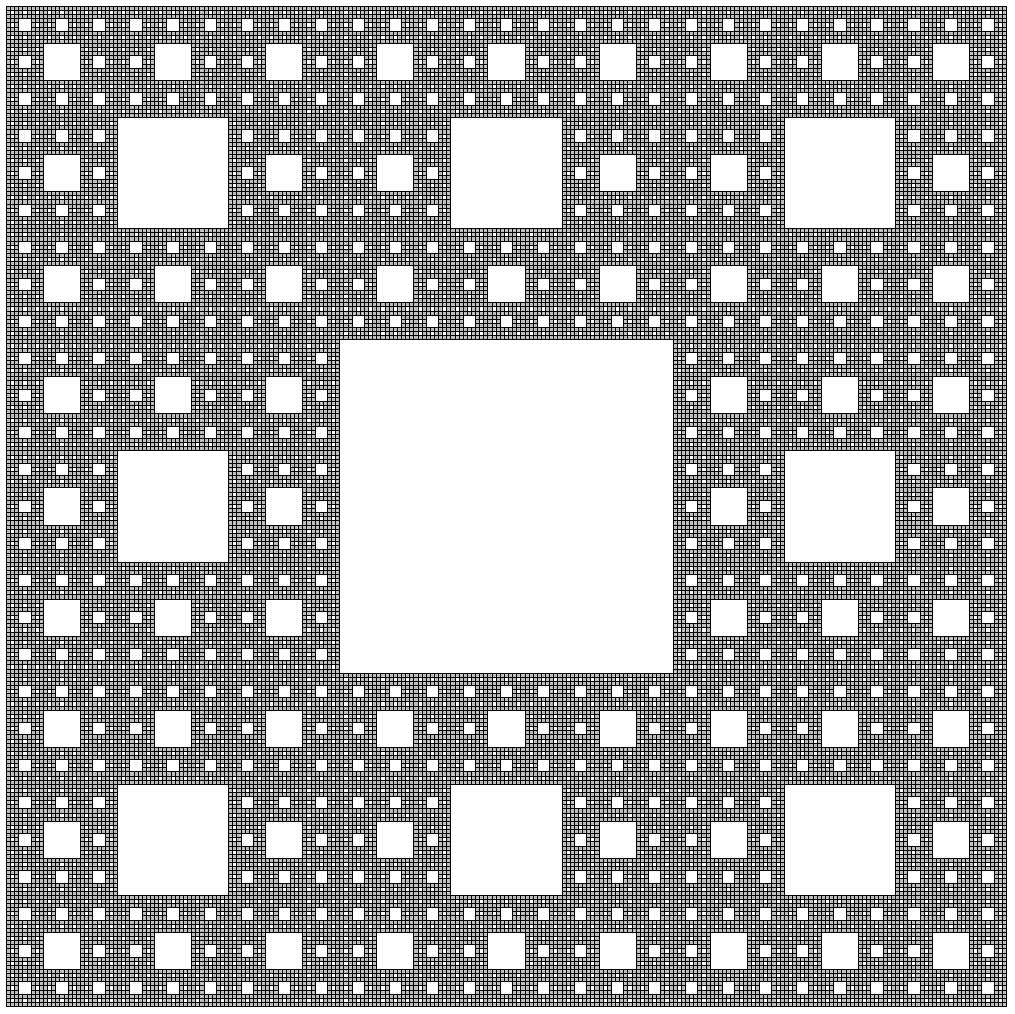 This is called the Sierpinski Carpet.

But that’s not all you can do with this concept! You can also take it into three dimensions. Take, for instance, a tetrahedron:

We can chop this tetrahedron up so we have three little tetrahedra and a gap in the middle.

This is a really cool variation to try to build yourself! Here’s an interesting question to think about: When we chop out the middle of the tetrahedron, what’s the shape of the piece we’re getting rid of? (Hint: This time, it’s not just another little tetrahedron!)

What if we tried extending the Sierpinski Carpet into three dimensions, too, so we’re chopping up a cube? What might that look like? Take a guess, and then look up the Menger sponge. (Yes, Menger… not Sierpinski. On the matter of shape-chopping, a mathematician named Karl Menger picked up where Sierpinski left off.)