In the city of Trafficville there is a region where all the streets are one-way. If a car drives into this region, it can only drive south or east. (It’s really not very practical. The city council is debating what should be done about it.) 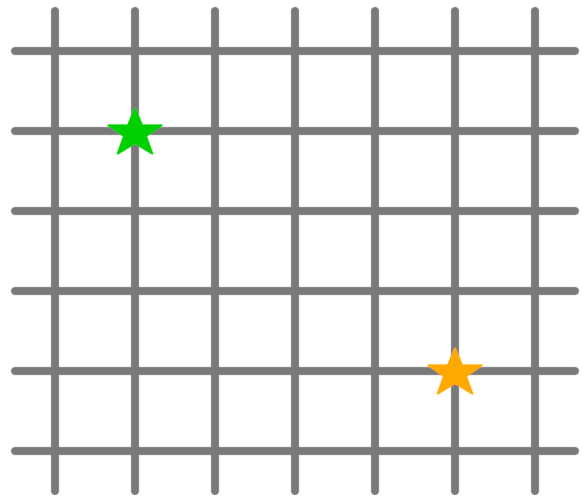 Restaurant owner Rosa Gustaroni, who is going to work this morning, wants to drive from the bakery (at the green star) to her restaurant (at the orange star). How many ways can she get there? Which route is the shortest? 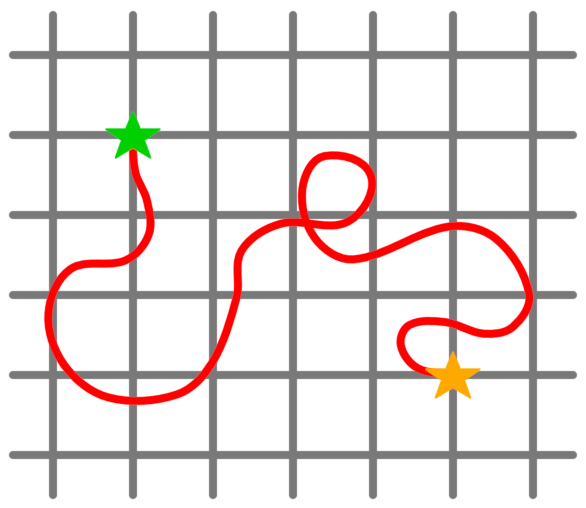 In fact, we can do even better. We know that she can’t go on streets north or west of her house without driving the wrong way along a one-way street. And we also know that if she drives too far south or east, she won’t be able to get back to the restaurant without taking a big detour. So we can simplify our diagram like so: 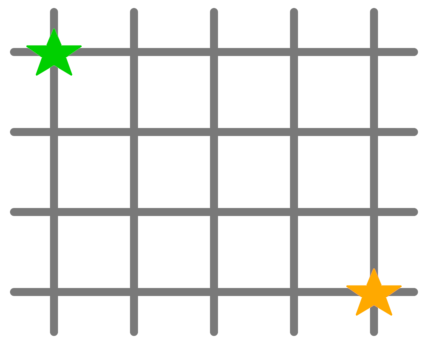 Now, if we look hard enough we discover a key point: whatever route Ms. Gustaroni takes, she has to go exactly four blocks east and exactly three blocks south. No more, no less. That makes a total of seven steps, always – and that answers one of the questions we are asked. There is no “shortest” route.

What about the other question? How many ways are there to get from the bakery to the restaurant? We know that there will be seven total steps, and that three of them will be southward. Hey, this looks familiar – we’re asked to pick three of the seven steps to be southward! We’ve bumped into our old friend, choosing.

That means that there are $35$ ways for Ms. Gustaroni to drive from the bakery to the restaurant. (We’d get the same answer if we’d chosen the $4$ eastward steps – read more on choosing if you don’t understand why.)

Let’s put a twist on this problem. 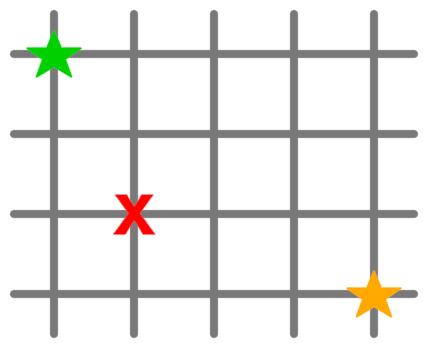 There has been a traffic accident at the intersection where the red X is, and the police have blocked off the area so that cars must go around the accident. Rosa Gustaroni still needs to get to her restaurant from the bakery. Now how many ways are there for her to make the trip? 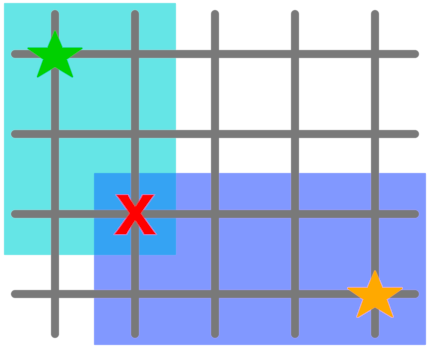 Let’s tackle these one at a time.

The total number of routes that Ms. Gustaroni could take, as we already calculated, is $35$. The number of bad routes, we just figured out, is $12$. So the number of good routes is

So Rosa Gustaroni still has plenty of possible ways to get to work.